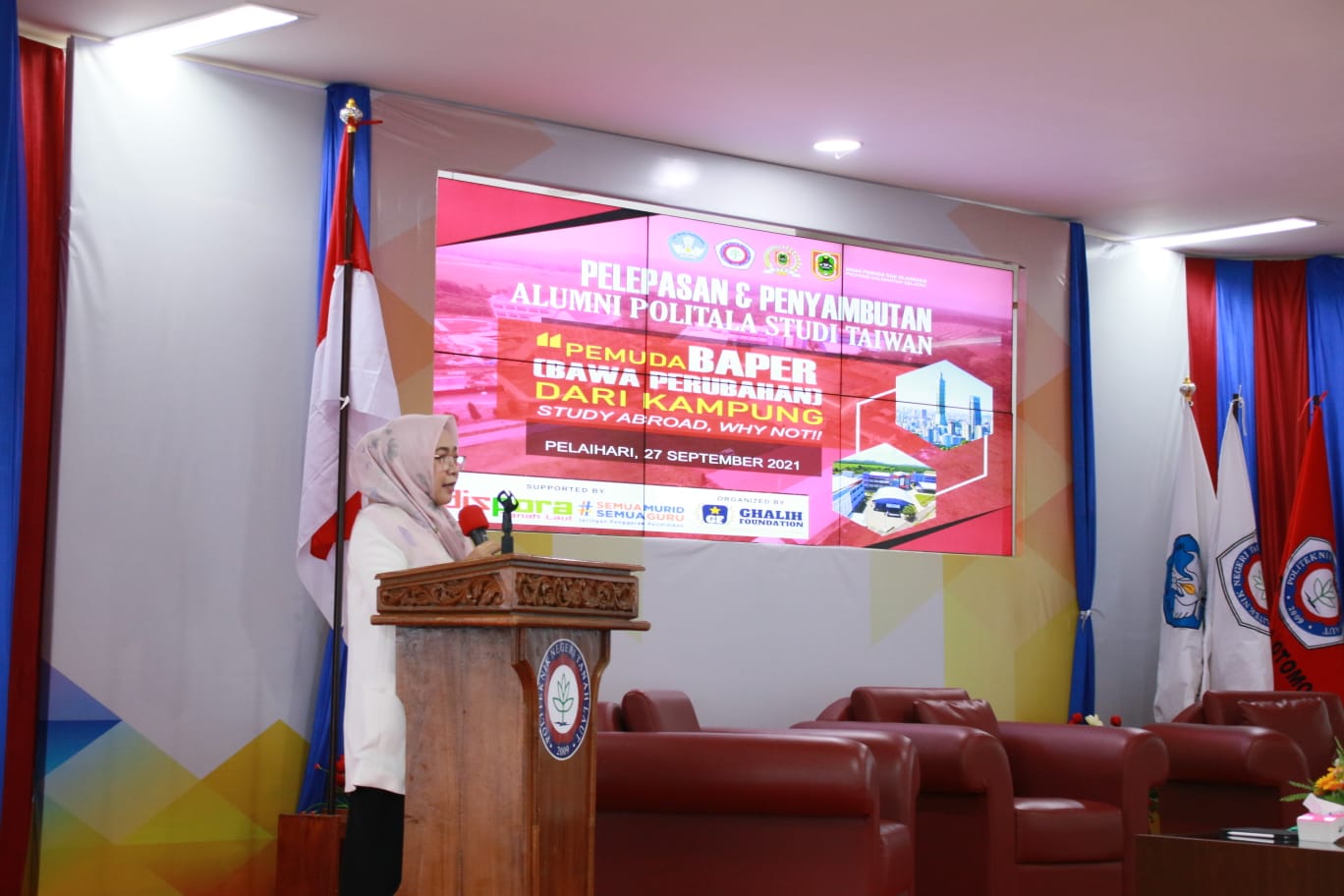 The event was attended by Deputy Chairperson of the South Kalimantan DPRD Muhammad Syaripuddin, Head of the South Kalimantan Province Youth and Sports Service, represented by the Head of the Youth Partnership and Award Entrepreneurship Section, Deny Saputra, Director of Politala Dr. Mufrida Zein, S.Ag., M.Pd and the Politala Board of Trustees Dr. Sihabuddin Chalid, M.M.Pd in ​​order to appreciate and provide direction to 4 Politala alumni who have completed their education in Taiwan and 17 alumni of the Tanah Laut State Polytechnic who will soon leave for Taiwan to continue their studies.

In front of 17 alumni and their parents who were present onsite and online, Sihabuddin Chalid expressed his happiness and pride to Politala alumni who had completed their education or who were soon to study in Taiwan.

“With the arrival of our alumni who have completed their education in Taiwan, they can share their experiences while studying in Taiwan with 17 Politala alumni who will soon leave for Taiwan,” said Sihabuddin.

As stated by Sihabuddin Chalid, Director of Politala Mufrida Zein also welcomed with happiness and pride to Politala alumni who had completed and who were about to study in Taiwan.

The Director also said that he had signed the fact of integrity with the Ministry of Education and Technology, regarding funding for pocket money for alumni who would later go to Taiwan.

“The departure of Politala alumni to continue their education abroad is one of the goals of all State Polytechnics in Indonesia, namely to create graduates who can work, continue studying and become entrepreneurs or BMW,” said Mufrida.

Furthermore, the delivery of direction and motivation by the Deputy Chairperson of the South Kalimantan DPRD, Muhammad Syaripuddin, to Politala alumni. Syaripuddin expressed his pride for Tanah Laut Regency, especially Politala. Because it has prepared superior human resources for the future.

Syaripuddin continued that he hoped that later Politala alumni who had studied abroad would be able to have a positive impact on South Kalimantan in the future.

At the end of his directive, Syaripuddin left a message to Politala alumni. That as youths, they must become actors of regional development by being able to make a real contribution, work and achieve pride in the region. Continue to move actively, and be able to adapt to the conditions of civilization and the demands of the times.

The event continued with a question and answer session and sharing experiences by three Politala alumni who had completed their education in Taiwan including Afrizal Habibi, Muhammad Syarul Rizal and Muhammad Ega Nabhan.

Strong goals and intentions as well as the support and prayers of parents are the main messages to alumni who will later depart.

The last session was a speech by the Head of the Partnership and Youth Award Entrepreneurship Section, Deny Saputra online. Deny Saputra in his speech, really appreciated and very supportive of this study abroad program. Because it is very synergized with the South Kalimantan Youth and Sports Office program in the field of youth development in the region. Hms_Politala