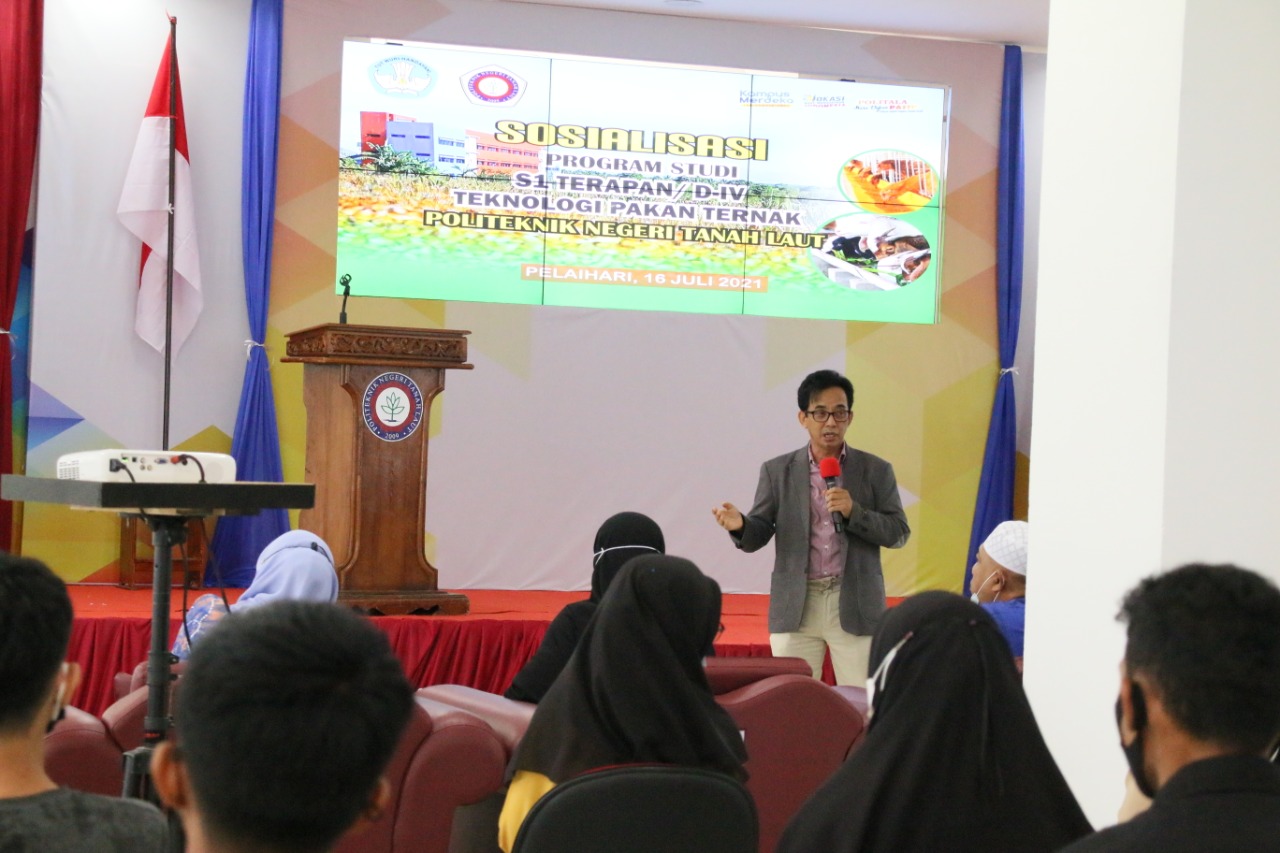 Also attending offline was Wadir III Politala, Head of Study Program and lecturers of Animal Feed Technology and Agroindustry. The invitees who attended consisted of Rodi M as the Principal of SMKN 2 Pelaihari, as well as several teachers and graduates from SMKN 1 Pelaihari, SMKN 2 Pelaihari, SMK Harapan Bangsa Kurau, and SMKN 1 Kintap.

The activity began with singing together the anthem Indonesia Raya, an initial speech by the Head of the TPT Study Program, Dwi Sandri, and then continued with the main event, namely socialization.

The event, which was held in the Informatics Engineering Building Hall, presented Dr. Sihabuddin Chalid as chairman of the board of trustees and one of the founders of Politala as the main resource persons.

Certificate of Companion Diploma (SKPI) in the form of a certificate of competence must be owned by Politala graduates and becomes a strong supporter to be accepted for work in the industry. “The Competency Test Certification that you will get after practicing in semester 5, is what industries are looking for now and is here (Politala),” said Sihab.

Sihab conveyed that it is targeted that the animal feed laboratory will be completed in the coming year with a closed house system. This system will later be integrated with other study programs such as Road & Bridge Construction Technology (TRKJJ), Automotive Technology, Information Technology, Agroindustry, and Accounting. So that the new TPT study program will be the flagship at Politala.

The expression of hope was also conveyed by Sihab to prospective students participating in the socialization to become prospective managers and young supervisors of animal feed through the TPT Study Program. “How many animal feed companies will there be, you are the one who will be the manager, supervisor, owner for the next 5 years. We will seize at least 60% of South Kalimantan from the Tanah Laut people who will occupy it,” said Sihab.

“Due to the unavailability of goats, according to data every month in South Kalimantan receives 6000 goats from Java. We see the problem lies in the management of maintenance and feed. So that the opportunities for graduates from Politala are very large to become entrepreneurs in South Kalimantan in raising goat breeders”, said Rizal, exemplifying one of the issues of livestock needs in South Kalimantan.

Meldayanoor also revealed that this TPT Study Program has very large and many job opportunities in Tanah Laut Regency.

The second opportunity is to enter the realm of pharmaceutical and vitamin chemical companies as a supporter in the livestock business.

The third opportunity is a partnership opportunity for livestock companies. Most of the companies involved in the Indonesian Poultry Association in South Kalimantan are located in Tanah Laut Regency.

Melda revealed that in Kalimantan there is no animal feed technology study program, except only at the Tanah Laut State Polytechnic. “Many and great job opportunities await Politala Animal Feed Technology graduates. It is impossible that their graduates will be unemployed later and it will be a loss for prospective students if they do not take this opportunity,” concluded Melda.

Some of the socialization participants participated in giving testimony directly. One of them is Tiara Fatika Sari from Sampit. One of the participants via online zoom, who enthusiastically expressed his interest in registering for the Politala Animal Feed Technology Study Program.

After the presentation session from Dr. Sihabuddin, continued with an explanation and learning session about career opportunities at the Tanah Laut State Polytechnic. This session was presented by Noorisariyani, as the administrator of students & alumni of Politala. He emphasized once again about the opportunity to choose a new TPT study program. “You can choose any study program. However, if you are smart, you will choose an option that has few competitors, namely this new study program where this study program is the first and only batch in Kalimantan,” said Risa.

The last presentation session was the delivery of student registration technicians by Rahman as the academic administrator of Politala.